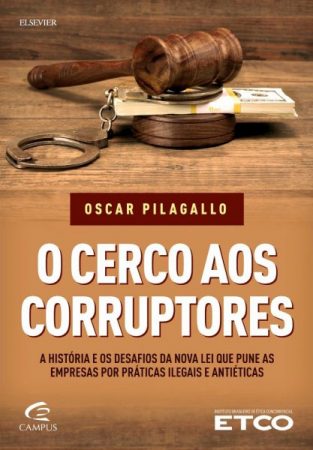 The constant corruption scandals that have been reported in Brazil lately can make many people think that crime is winning the war against ethics. But greater disclosure may in fact represent the opposite: the real confrontation of this problem that corrodes the nation. This is the thesis that prevails in the book The Siege of Corruptors - The History and Challenges of the New Law that Punishes Companies for Illegal and Unethical Practices, written by journalist Oscar Pilagallo from a seminar held by ETCO-Brazilian Institute of Ethics in Competition in partnership with the newspaper Economic value.

The seminar, held in 2014, was one of the first events in the country to discuss the effects of the so-called Anti-Corruption Law, which came into force earlier that year. The new law increased the punishment of companies involved in corruption cases and encouraged the adoption of integrity programs to prevent this evil. The ETCO and Value brought together lawyers, compliance professionals and other experts on the subject, in addition to authorities such as the then Chief Minister of the Comptroller General of the Union, Jorge Hage.

Getting used to corruption

The book summarizes the main themes discussed at the event, such as the objective and joint responsibility of companies, the rules of leniency agreements and the principles that should guide a compliance program. In addition to the content of the seminar, Pilagallo incorporated the new regulations of the Anti-Corruption Law that occurred in 2015 into the work.

At the opening of the book, ETCO President Evandro Guimarães talks about the moment Brazil is going through. “The greatest risk for a nation is not corruption itself. Corruption exists even in the most advanced countries. The greatest danger is that people will get used to it, stop trusting institutions and lose their capacity for indignation. Or worse: to believe that corruption is part of the culture and to begin, themselves, to commit illegal acts in exchange for undue advantages without guilt or remorse. Such a country is doomed to ethical, moral and economic decay. Fortunately, the signs are that Brazil has chosen another path ”, wrote Evandro.

This is the fifth book that Oscar Pilagallo writes for ETCO. The others were Competition Ethics - Reflection, Analysis and Perspectives; Corruption - Barriers to Development in Brazil; Law and Economics; is Market Tax.

O Siege of Corruptors it was launched by the publisher Elsevier-Campus, has 130 pages and costs R $ 45. The book can be purchased through the website www.elsevier.com.br.

Are you doing your part?

In times of heated discussions on ethics in politics, the Brazilian Institute for Competitive Ethics (ETCO) carries out a campaign to raise awareness of market, bakery and bar owners

23 companies were recognized as integral in the relations between public and private sectors The Ministry of Transparency and the Comptroller General of the Union (CGU) announces, this Wednesday

ETCO supports act in defense of ethics, on the international day against corruption

The Ministry of Transparency and Controllership-General of the Union (CGU), in partnership with the National Confederation of Industry (CNI), holds, on December 6, in Brasília (DF), the 4th Conference

In an initiative supported by the ETCO Institute, the American Chamber of Commerce, Amcham Brasil, takes executives to the USA in September for its first compliance mission São Paulo - Mission

Ministry of Transparency, Inspection and Control maintains functions of the former CGU

According to the minister of the new portfolio, status guarantees greater visibility to the agency. The Federal Comptroller General (CGU) officially became, last Thursday (12), the Ministry of

'Silent corruption' affects the performance of countries and companies

The recent Lava Jato and Panama Papers scandals have brought up the debate about corporate corruption. But it can be much more present in the daily lives of companies than if

The Michel Temer government plans to prepare a new provisional measure to discipline leniency agreements with companies involved in corruption cases, including the companies investigated in the