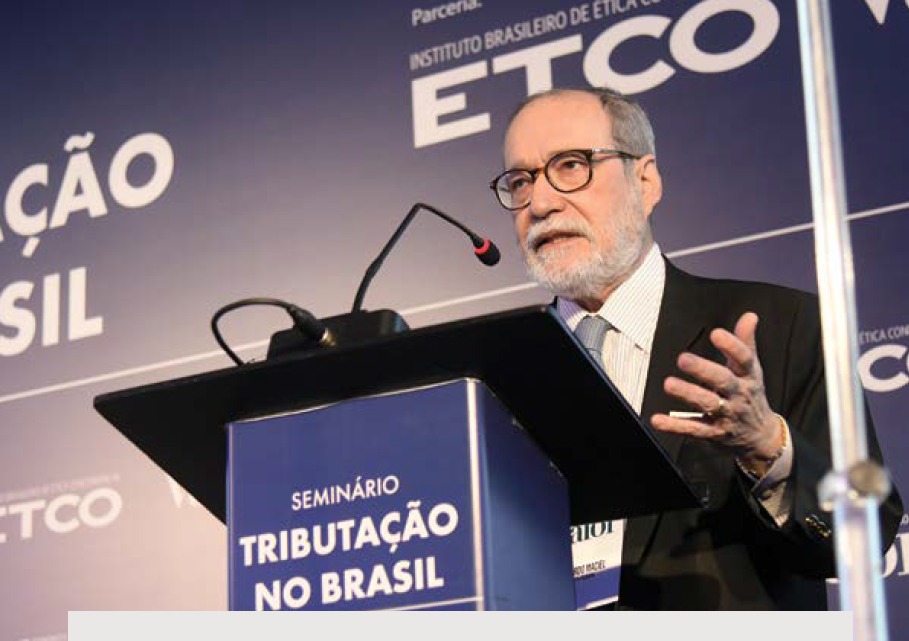 Few Brazilians understand tax systems as much as Pernambuco's Everardo Maciel, president of the ETCO Advisory Council. He has followed the theme since the 1960s and accumulates deep academic knowledge with a relevant career in the public sector, which includes eight years as secretary of the Federal Revenue in the FHC governments (1995-2002).

In his lecture at the Taxation Seminar in Brazil, Everardo made strong criticisms of the reform proposals being debated today in Brazil. He stated that they do not deal with either the great contemporary issues of the tax field discussed worldwide or the real problems of the Brazilian system, on which he made an overview.

He also dismantled some clichés about the Brazilian tax model, which he called “mystifications” of those who do not study the topic in depth, and pointed out what he considers to be major mistakes in the main tax reform project under discussion in the Chamber of Deputies, PEC 45 / 2019. Following are excerpts from the lecture:

What the world discusses

“Sometimes, when I look at the discussions taking place in Brazil about tax matters, I have the impression that I am on another planet. Because that is not what is being discussed in the world. We have at least three major tax issues that are being discussed outside of here: first, the erosion of tax bases; second, the taxation of the digital economy; third, a problem to which we still have no answer, which is that of new sources of Social Security financing. ”

Taxation of the digital economy

“When we talk about taxing consumption we have always been looking at issues such as the provision of services and the sale of goods. Now, we have another phenomenon, poorly known, badly sized, but perhaps the most relevant of all: how to tax information? When you go to Google, which historian Yuval Harari calls ´the attention merchants´, the product is you. We are, therefore, dealing with a phenomenon completely unlike anything known. The information he captures by apparently giving away free information has become, perhaps, the greatest source of contemporary wealth generation. To this end, the European Union approved at the end of last year a turnover tax, a tax on the billing of large companies that convey information and that are in the digital economy. A cumulative tax, which will start to dismantle some theories about cumulative and non-cumulative. ”

"The world changed. The nature of employment has changed. It is a revolutionary change. There are discussions about taxing financial transactions. France and Germany objectively discuss this, which is perhaps one of the only possibilities for creating a new source of Social Security funding. A person as qualified as the Nobel Prize in Economics Robert Shiller is considering taxing robots, in which he is supported by Bill Gates. ”

Clichés and mystifications in Brazil

“Taxation, as it is somewhat unpleasant, gives a remarkable space for mystification, for hasty conclusions about things that have not been studied seriously. The first is the complexity of the tax system. Complexity is inherent in phenomena. What cannot be distinguished is complexity of operability. Tax systems must be operable. They have to be easy. And not necessarily simple, because simplicity or complexity are inherent to the phenomenon. ”

LITIGATION: “Litigation has to do with the tax process, not with the tax. It can be any tax, if the process is dysfunctional, there will be excessive litigation. ”

LEGAL INSECURITY: “Which is associated with concepts with low normative or controversial density. But this has to be resolved by the normative way, it does not depend on taxes. ”

Border between ICMS and ISS

“The biggest problem that exists is the border between ICMS and ISS. How to do this is a challenge to intelligence. The simple solution says: ´the two come together´. Well, but what about the federative issue? How is all the jurisprudence that exists around this? Is it to throw the dirty water in the basin with the child? ”

“PEC 45 is a magical solution to solve problems, centered, among others, on the principle of destiny. Fate principle is a tax evasion matrix. He wants to institute an IVA, which is an obsolete tax, from 1949, absolutely unable to deal with the digital economy in a world that is thinking about something after taxation of consumption and income. It is stated that, with the adoption of this model, the Brazilian GDP will grow ten percentage points. This is shame, it is bad magic, it has no connection. ”

“In essence, it is a transfer of taxation. Who wins with that? Financial institutions, large companies in the industrial and commercial fields. But if the aggregate tax burden is constant, someone pays that bill: the 850 taxpayers who are in the presumed profit, who are essentially small service providers, traders and industrialists. The civil construction sector also pays this bill. ”

“The price of medical appointments will rise, school fees will rise, the health plan will rise, which is the only way to balance the new account. PEC 45 increases taxation in these sectors by between 300% and 700%. ”

SELECTIVITY: “It says that for VAT taxation everything will be the same, so the bread has the same rate as the fur coat. And, to correct this injustice, the poorest are given a 'tax scholarship'. It definitely doesn't work. ”

FISCAL EVASION: “VAT has serious problems with tax evasion, one of which is called ´carousel´, the illicit sale of services to transfer credit. Another: I'm going to see the doctor, he says' my dear, now the rate is 25% ´. What will happen next? 'Is it with a note or without a note?' ”

INCREASED LITIGIOSITY: “More than 150 articles of the constitutional text and the Transitional Constitutional Provisions Act are dealt with, with forty new concepts. This gives litigation for eternity. ”

CONFLICTS BY SHARING: “PEC says that a singular rate in a complementary law will define the sharing and binding of taxes. This is a deadly war between federal entities and between sectors. ”

FIFTY-YEAR TERM: “For fifty years there would be compensation for losses between the federal entities. Does anyone in their right mind believe that there will still be taxes in fifty years - at least as we know them today? ”

“I am in favor of not-so-drastic reforms”

For tax lawyer Roberto Quiroga, proposals for profound changes have little chance of advancing because of the natural clashes of the democratic regime